Is it possible to make a cinnamon roll that is so delicious and tastes just like Cinnabon but is actually made with better ingredients?

With just the right amount of sweetness, these healthy cinnamon rolls will be the perfect addition to your Christmas morning or weekend brunch spread!

My husband absolutely loves cinnamon rolls.  His favorite are a toss up between the giant ones you get from a bakery and the refrigerated ones that come in a can.

I wanted to give homemade cinnamon rolls a try with some of ingredients that I enjoy baking with.

This homemade cinnamon roll recipe is surprisingly easy.  You can have fluffy and delicious cinnamon rolls in less than 90 minutes.

These easy cinnamon rolls are also great to make ahead!  Christmas morning will never be the same once you pop these delicious babies into the oven!

What Makes These Healthy Cinnamon Rolls taste so good?

Using a few ingredients swaps, I was able to make dairy free cinnamon rolls that taste just like the real thing.  They even have a dairy free glaze that tastes amazing on top!

Here are the ingredients swaps for the cinnamon rolls:

Both Bob's Red Mill and King Arthur make fabulous gluten free baking flours that I've had success with in other baking recipes.

I get many of my healthy baking ingredients delivered direct to me using Thrive Market.  I love being able to get things delivered fast to my home!

You can get each of the ingredients you’ll need for this and more of my healthy treat recipes at Thrive Market.  Get $20 in shopping credit when you sign up for Thrive Market!

The swaps for the dairy free cinnamon roll icing were:

How to Make Easy Dairy Free Cinnamon Rolls in less than 90 Minutes!

These easy cinnamon rolls are simple to prep ahead of time for brunch and are a great addition to your Christmas brunch table!

To begin heat your almond milk in a small sauce pan until bubbling.  Mix in coconut oil and allow to cool.

Then, combine the dry ingredients followed by adding in the water egg and almond milk mixture.  Your cinnamon roll dough is ready to be kneaded when it pulls together.

Knead for about five minutes and then let rise for ten minutes while you prepare the sugary deliciousness that goes inside!

Once you roll out the dough, you douse it with a good healthy serving of cinnamon sugar mixed with coconut oil.  Roll up the dough and use dental floss or scissors to easily cut clean slices.

Place the rolls in a baking dish, cover and allow the muffins to double in size (about 30 minutes).  Once risen, the cinnamon rolls take about 20 minutes to bake.  Top with glaze and let the melty deliciousness make your day!

You can easily make this quick cinnamon roll recipe ahead of time.  Just prep the dough through the rolling stage and then cover in plastic wrap and set in the fridge. 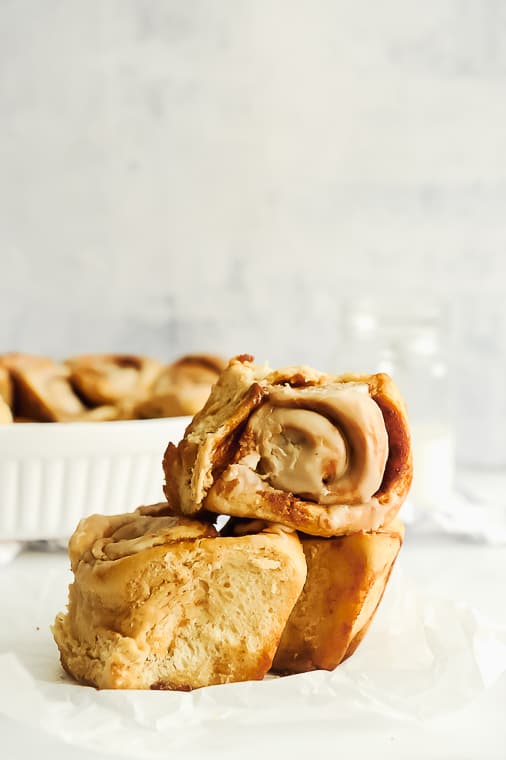 Here are a few more delicious brunch breads and muffins to add to your brunch table!

Nutrition info below assumes coconut sugar used in place of Truvia brown sugar blend. Recipe inspired by one originally posted on All Recipes.