So you ever have one of those days where you would literally forget everything even things that are clearly marked on your to-do list?  I have a piece of paper that I keep in my junk drawer that on one side says, "take out freezer food" and on the other side says "turn on dryer".  Obviously this is to have a HUGE visual reminder on my counter of these tasks I need to complete.  Well let's just say SOMETIMES I do not pay attention.  Of course on the day that I needed to "take out the freezer food" aka ground turkey to make a recipe I had planned for, I forgot.  So there we are with no meat base and very little to go off of for dinner. 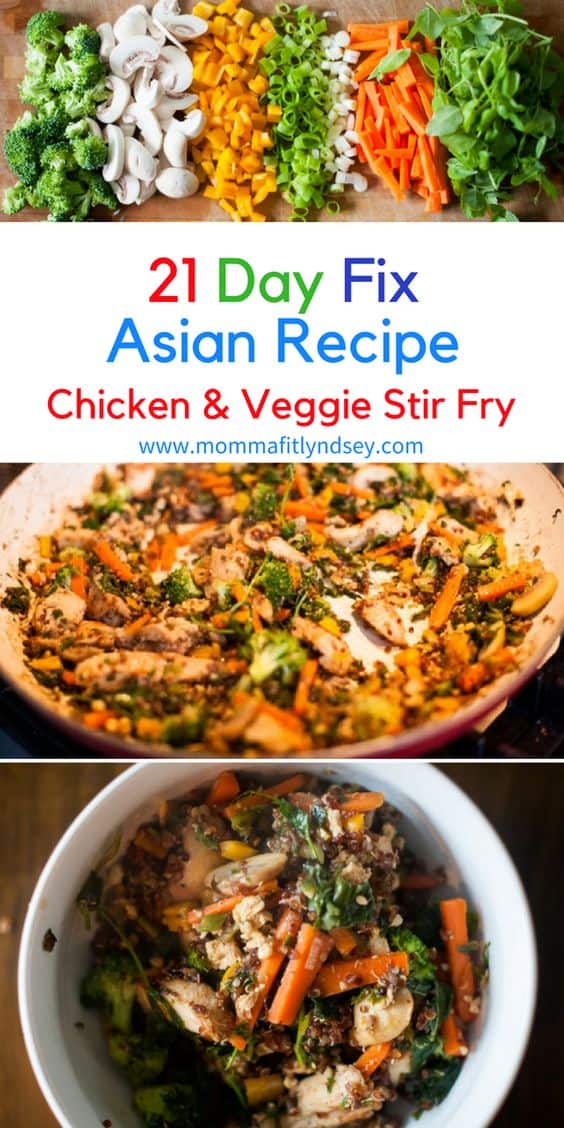 So in my best Sandra Lee semi-homemade thought process, I scrounged (again) through our freezer, fridge and pantry to see what would go together!  I had gotten a bunch of veggies from our CSA and was able to find some frozen pre-cooked chicken and quinoa kale blend.  Thus the 21 Day Fix Asian Stir Fry was born.

I chopped up some veggies including broccoli, mushrooms, yellow peppers, scallions, carrots, and pea shoots. 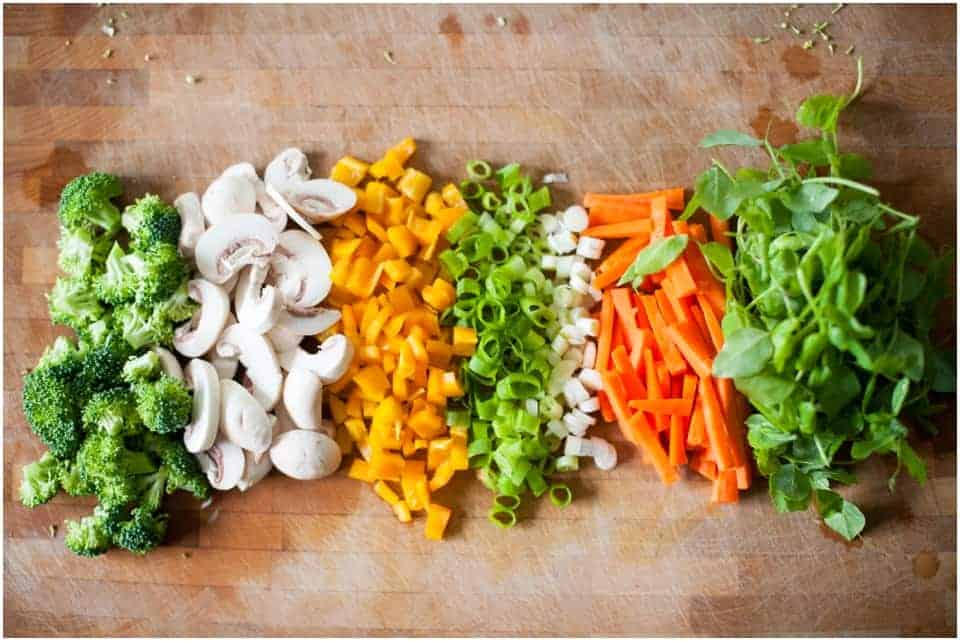 Measured out 1 yellow of the quinoa blend and 1 red of the grilled chicken (one per person).  Both from Costco!

Pulled out my starting line-up of spices, oils, etc. 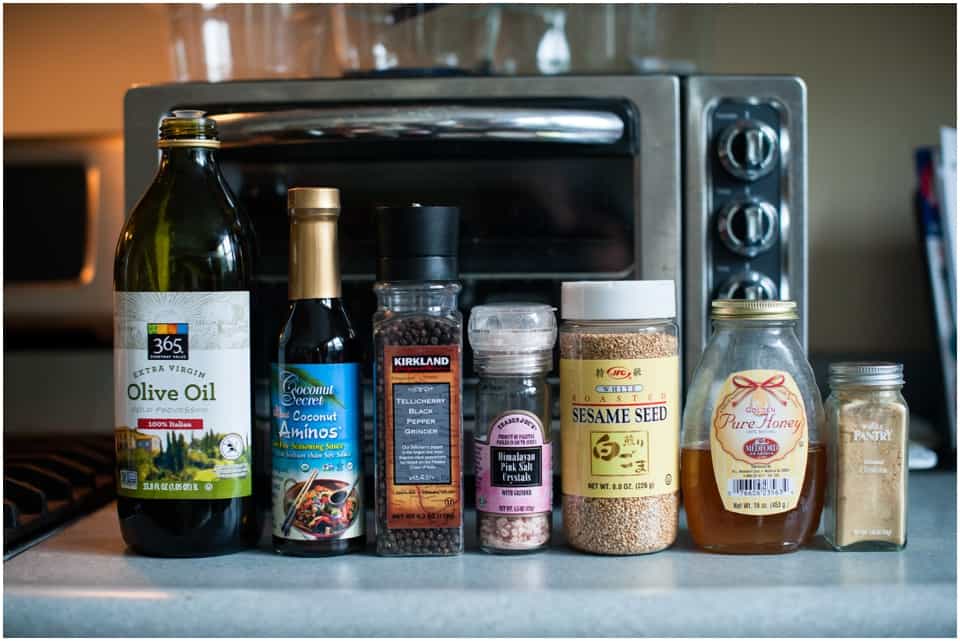 21 Day Fixing on a Budget?  Check out my healthy shopping cart from Aldi!

First I sautéed the veggies in a little bit of garlic and olive oil and sprinkled them with some s&p and some ginger!  I removed the veggies from the heat after they had cooked and then heated up the chicken in the skillet.  Once they were heated, I combined the veggies with the chicken and sprinkled some more ginger, sesame seeds, and a dash of coconut aminos!  I also added in the quinoa kale which was conveniently heated in the microwave!

Seriously easy, seriously delicious.  This is a gorgeous weeknight meal that I will definitely be making again! 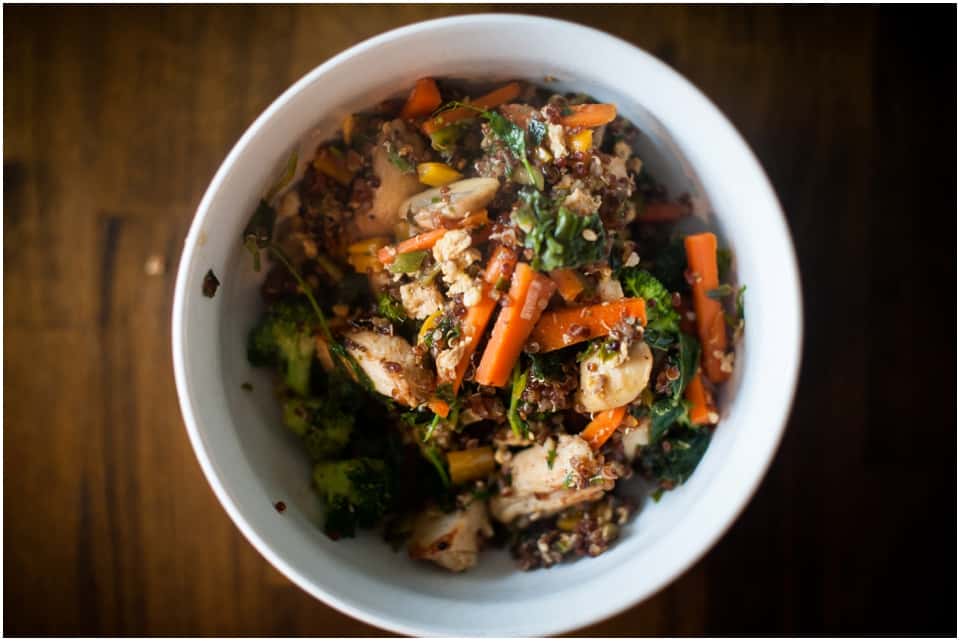 Chop up veggies and garlic, put in a skillet, season with s&p and ginger and sauté in 1 tablespoon olive oil until cooked but not mushy. Put in a separate bowl and cover with foil to keep warm.Cook quinoa according to package directions and set aside.Heat 1 ¼ cup frozen chicken in skillet according to package directions. Once heated through scramble 1 egg into pan with chicken and mix around. Add veggies and quinoa and stir together. Season to taste with S&P, ginger, sesame sides and a sprinkling of coconut aminos.  Makes two servings, I estimated this as 1 green, ¾ red, ½ to ¾ yellow (depends on how much quinoa), 1 tsp. The coconut aminos would technically be a blue I believe but I used so little for the whole recipe that I wouldn't really count it. It was YUM!

Join 20,312 other followers and subscribers in getting more healthy recipes on a budget right to your inbox!  And get your free weekly meal planner!